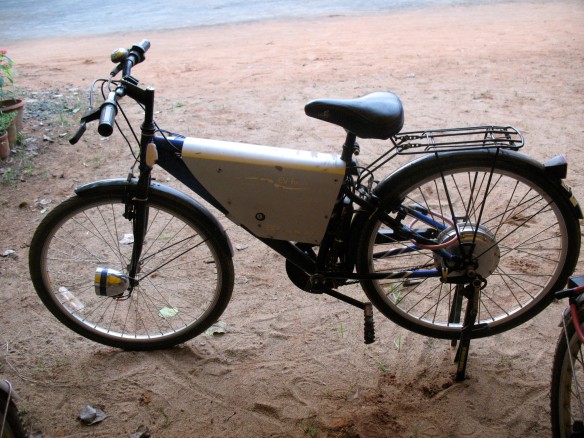 When we arrived in Auroville in December I was really pumped for my sustainable living project. I was looking forward to seeing what it was like to get around without gas, and if it made any difference at all. It quickly became obvious that it did. Unlike living at the American Pavilion my quest for green transportation has not been easy here.

The monsoon rains was the first thing to throw a wrench in my plans. The electrical bikes can’t be used in the rain, and if they even get rained on that breaks them. So no bike for me in my first couple days here it seemed like at the time. The rains continued though, and we didn’t get our bikes until we’d been here for at least a week.

Something else I didn’t think about when I choose my green option was sticking with the pack. Its’ my first time in India, and as I didn’t really know where anything in Auroville was then I did’t want to be riding around lost by myself. So between the rains, and my sheep mentality, I was riding on the backs of scooters for a good few days. So ungreen of me!! 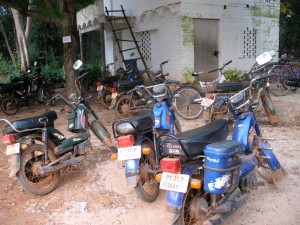 After a few days of the monsoon rains, Tanya, one of our professors on the course, was really great and rented a normal bike for me to support of my green initiative. I had a bike! No gas for me! I was so excited!

Off I went, happily biking to and from work on dirt roads that had been held together by the rains. It was hot, and I’m not an athlete, but I tried to be cheerful because now I was living green! 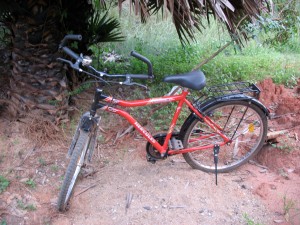 Then the electrical bikes arrived! Right on the day I wanted to do a lot of running around Auroville so I was pretty excited. I took one out and happily buzzed along to my destinations, going only a little slower than a gas run scooter. The bike ran easily, and if I stood up when I hit potholes it didn’t matter that there were no shocks in the wheels.

Alas, that was not the end of the story. I innocently put my electric bike key back so that Martanda (one of our trip coordinators) could redistribute bikes and scooters on the next day. That’s when I got given the key to a different bike, which was much to big for me. Not a big deal, Martanda came to the rescue and switched it, and I figured I finally had a bike of my own! 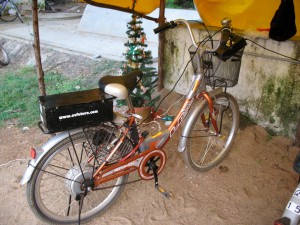 It was broken; But Martanda said it could be fixed, so I took my normal bike out again for the day. I figured I have two legs and they are definitely green so that’s what I used. Thanks to Martanda my bike was fixed by the next day, and after a day riding in the heat I was really looking forward to my electric scooter.

So off I went again, on my fixed electric bike! It wasn’t meant to be though, and my cute orange electrical cycle died on the first leg of my ride to work. I biked it myself all the way to work and back, and pronounced it dead to Martanda the next day. There was something seriously wrong with it. I figured that by now Martanda was done with me and my electric bike saga, but no! He persevered, and gave me yet another bike.

Finally, Brendan the electric bike and I rode out and I haven’t looked back since. He is a wonderful bike, and I hope that that is the end of the story …