I have been spending a lot of time with Biggie, a woman who works at the Botanical Gardens.  Biggie is a small, energetic woman who always seems to have a purposeful bounce in her step.  She moved here in ‘72, and helped build Auroville.  Although she has been back and forth between France, Germany and Santa Barbara over the years, she said Auroville is her home and she could not imagine living anywhere else.

Biggie invited me to her home for tea and then took me to see some of her favorite parts of Auroville.  I was pleasantly surprised by her home.  She said she had it built 15 years ago.  The arched, wooden frames of the doors and windows are made with the Acacia trees she planted in the 70’s and the walls are made from white, painted cement/dirt bricks that Auroville started using as a sustainable building material.  The Acacia trees or what the Mother named the Work trees, are also very sustainable because they grow quickly.

In addition to her house being sustainable because it is made from materials that are easily found (or that she herself planted years ago), she found Tamil boys looking for a trade to be trained in and paid them to help build her house to help them learn architecture and construction.

She lives back a windy road off of the Green Belt that has a round boulder with her and her two neighbors names and arrows pointing in the directions in which they live. The Green Belt is the outer ring of Auroville which makes an effort to be completely sustainable.  It runs on solar power and the water used is pumped by windmills.

While I was with Biggie, she took me through what used to be called The Seven Banyan Forest because of it’s giant Banyan trees.

She showed me one in particular that was next to a giant gorge they dig for drainage.  Later that day, she showed me the picture of the same Banyan tree when it existed alone in the red, laterite desert amongst a few Palmyras. 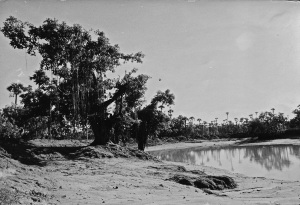 The Same Banyan in the 70's

Another picture she showed me from the beginning of Auroville was of Johnny, one of the first people to come to Auroville. 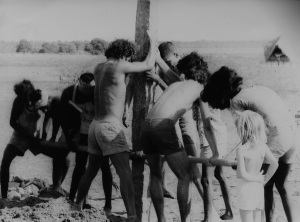 I went with her later that day to meet him and see the part of the Seven Banyan Forest he developed.  Where Biggie lives appeared as more of a neighborhood with more clearings for the houses and defined roads; where Johnny’s area reminded me more of a camp only accessible by paths.

Johnny told me how the Banyan tree had very tasty leaves for animals and doesn’t survive if it grows from the ground.  Instead, the birds eat the leaves and carry the seeds to the branches of the other trees which is where the Banyans grow from.  If you look closely, you will usually notice another tree, such as a Palmyra rooted in the middle of the Banyan tree.

I asked Biggie why the Banyan tree had aerial roots and Johnny did not know, but one of the little girls running around told me it is so the branches can grow out further.  I am thinking now that because the Banyan tree starts growing in another tree, rather than it shooting it’s roots into the tree it grows off of and potentially killing it, perhaps it has adapted to grow it’s roots down from the tree into the ground (but that is just a speculation on my part.

Johnny also told me stories about the Tamil people believing that the Banyan trees are inhabited with evil spirits, but those stories have nothing to do with sustainability so I’ll leave them out…Especially so I don’t scare anyone 🙂

Johnny’s son is building a house next to Johnny’s, which makes Johnny’s house look like a shack.  I saw the inside and it looked like a house you would see in parts of California or Florida.  It is a very large, solid house that has about five rooms and walls and ceilings that appear to be made from cement.  The doors on the house have very intricate carvings in them, are two or three times as thick as a normal door and are made from very solid wood (which would be less sustainable because the solid wood takes much longer to grow than the softer wood of the Acacia tree).  It was funny to see Johnny, who looked like he is a hippy straight out of the 60’s and then his son who is very well groomed.  I am not sure what his son does, but he had just come back from Spain and brought a lot of high fashion magazines.  The contrast between Johnny and his son reminded me how Paul, from the Botanical Gardens, said that it is not Auroville’s goal as a whole to be sustainable.  Auroville is everything to everyone.  To Johnny, it is more of a sustainable lifestyle where to his son, it seems to be a playground away from the Western world.