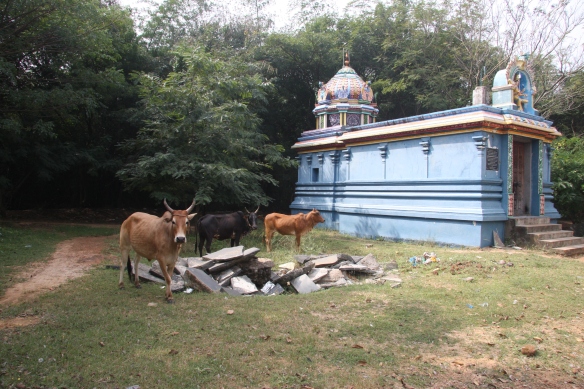 Upon arriving in Chennai from our long (long!) plane ride from Paris, we piled into a bus heading into Mamallapuram. As the sun was rising, I was way too excited to sleep on the bus so I gazed forward out the window towards all the Indian country had to offer me. Like a child, I turned to my friend Madeline, excitedly pointing and shouting “A cow! A cow!” She quickly responded “Where? I don’t see any cow!” (I have to admit I was a bit worried that I may have started to hallucinate from Malaria pills or lack of sleep!) But as the big orange sun continued to rise over the Indian horizon, I started seeing more of them (real cows, not hallucinations).  And as I looked closer I began to notice that the cows weren’t marked in any way. I had heard about the sanctity of cows in India but I wasn’t exactly sure how they functioned in everyday society. Were the cows wild? Did they belong to someone? Why were they loose in the street? I didn’t see any kind of brands on these cattle, nor colored ropes or markings of any kind. I turned to our unofficial guide and local Aurovillian, Perumal, and asked him how people knew which cow was theirs. He promptly replied, “Well, you know your cow like you know your kid”. He told me that during the day, people let their cows roam free in the village and use their milk to drink and manure mixed with hay to create floors in homes. When cows become too old to produce milk they are turned out and allowed to wander through the streets, living out their last days in peace. Coming from Texas, I am familiar with people owning a couple hundred head of cattle at a time, and meticulously making sure each one is branded with the ranch’s symbol. In my mind, all cows looked alike and I would have never thought that a person would equate the knowledge of their cow to that of their child. This was the beginning of a series of realizations and understandings that I’ve had in just these first few days. It is amazing to learn about differences and similarities between my home culture and this one. Coming from a small town in West Texas, I saw Paris as “exotic”, never thinking I would ever have the opportunity to visit India! The more time I spend here in Auroville and the surrounding villages, the more I begin to understand (or at least try to understand) their way of life.
Today we had an especially interesting presentation given by Ribhu Vohra from Soma Waste Management, who explained some obstacles faced by his waste management initiatives. He described the dangers of both burning the trash (releasing toxic fumes into the air) and dumping trash in the street (contaminating the drinking water and attracting insects). He explained that people often are just not motivated to pick-up the trash, and when asked to recycle they simply don’t have the time or energy. One interesting solution to this problem that was suggested was the idea of hiring adolescents to ride bicycles around the villages, giving cash for recyclables on the spot. By going door-to-door, the women would simply have to hand over their plastics and metals to the boys, who would then pay the women in cash. Although recycled bottles and milk cartons don’t bring in an abundance of income, these women have the opportunity to possibly make enough money to pay for a meal for their family by simply separating their waste. This is just the tip of the iceberg of one of the many sustainable practices that I’ve come into contact with here, and it’s only day seven! I can’t wait to learn more about these exciting initiatives and how I can get involved to help!