In India, what surprises me most is the ability of people to persevere. With Cyclone Thane, the worst to hit this area in decades, tearing through the region just over 10 days ago, I’m inspired that everywhere around me seems to be bustling with activity.

In the hours before the storm had even passed, several family business owners had braved the wind and the rain to open up shop, providing people with needed supplies, like food and water. But it wasn’t easy for them to get there. Many traveled an hour plus on roads littered with large trees and power lines, which had thankfully been turned off by the government the evening before. Unfortunately, they arrived to their store fronts only to find their front spaces damaged structurally by debris or water. Amazingly, they pressed on with family members helping to bail water from the store front and cut away fallen trees. 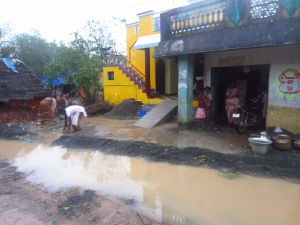 It didn’t stop there, though. While many of us, having come from developed countries, would simply wait for power and road crews to cut through the debris and restore power, that isn’t an option in rural India. Without immediate access or government public services to do this type of work, villagers organized themselves, sending one able-bodied male family member to help clear the roadways in the days and weeks after the storm. Machetes in hand, they cut trees from roadways to make them passable, restoring power poles and lines to their upright state and helping other villagers shore up homes was the new work order of the day for many men. Meanwhile, women in the villages, many of whom work in and around Auroville for better pay, tried to return to work as quickly as possible. 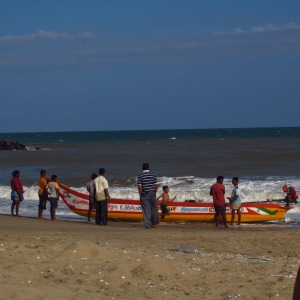 Several men help pull a village fishing vessel onto the beach in the days after Cyclone Thane.

Astoundingly, with the quick and organized work to clear the roads, the most pressing of needs could be addressed; water. Unfortunately, many of the water wells in this area are pumped using electricity and without power, villagers who share these wells go without water. The road crews, however, were able to clear major thoroughfares to many large community wells quickly, allowing reserve generators to roam from community to community pumping water to fill the wells adequately for short periods of time.

While the generator was used to fulfill pressing needs, the people who run businesses and organizations in Auroville have showed tremendous resiliency in the midst of continuing power outages, water rationing and personal loss. Take the staff at Morgan Café, with limited power they manage to turn out fantastic and nourishing meals via limited generator use. Employees at Upasana, managed to the clear the large tree that had come down and blocked access to the shop and started work on organic cotton clothing and other lifestyle items quickly. Well Café, which serves a dual purpose as both an eatery and space for culinary education and vocational skills, also re-opened despite significant damage to its building and structures.

At Marc’s Coffee, espresso wasn’t the order of most days after the storm, but pastry and sustainable filtered black coffee sourced from India was. Despite dwindling product reserves, founder and roaster, Marc Tormo, waited nearly two weeks for the generator to fill enough community bore wells before requesting it for business use over night so he could keep his store front running.

“The most important thing is to ensure people have water,” Marc said January 10, during the roasting. “The rest, we can figure out. It’ll be a late night, but I’m glad we’re able to roast.”

When the generator arrived, he made the most of it, roasting several large batches of his specialty coffees until the late hours of the night to provide work for his employees and to continue to provide coffee to the communities in and around Auroville.

The evening even turned into a bit of a celebration with espresso drinks all around and the roasting of the coveted Monsooned Malabar beans he had procured from the Malabar Coast. The beans are special because they are left in the open and swollen to absorb the moisture, winds and aromas of the monsoon air, much the way these beans had during the East India Company trading days when the beans would make the long voyage by ship from India to England and other places in Europe.

“We’re creating something here that is a piece of history,” Marc said. “Not only here at Marc’s Coffee, but in Auroville.”

It’s this genuine drive to move forward and to press on that keeps people in Auroville and the surrounding communities moving on, past the destruction and devastation. The resiliency of the human spirit here has been inspiring to watch and I’m thankful to have witnessed it.