On Tuesday, we visited several NGOs that had foundations in education – whether vocational, elementary, or health-wise.  I think it was interesting to examine the Indian system, and particularly how these NGOs worked to satisfy the needs that are not met through government schools.  In Indian government schools, children are taught “fundamental” subjects – math, science, etc. that will maximize employability.  An education in art or music or other creative outlets isn’t offered, and children have to go to other after-school “tuitions” or weekend institutions for these expressions.  This sheds some light on the nature of their culture, in other words, many parents are purely interested in measuring a subjective “success” of their children, whom many want to study to become doctors or other highly-specialized professions.  At the Aikiyam School, our speaker (the school’s principal) told us that most parents just want to know their child’s grade, not necessarily how they are developing otherwise.  There is a clear emphasis on the academic performance of the children, since many parents want their children to have promising, respectful careers that will both be a mark of pride and support for the family.  While this notion is understandable, children – around the globe – benefit from creative outlets where they can grow and express themselves creatively.  Children, and adults, also effectively learn from “play.”  In the Tamil villages, this idea is also two-fold, since there is a need to preserve the Tamil culture in a context of increasing globalization.  In my communication courses, there were many discussions relating to Western cultural imperialism, so I understand there is great importance on smaller states to preserve and promote their unique cultures and traditions, which is so often expressed through dance, music, and art.  Instead of letting Western, especially American, influences dominate the society, local customs should be celebrated, embraced, and communicated so that the culture can be sustained.  Since the government schools don’t provide for this (and since many families cannot afford to choose otherwise), the work and efforts of these NGOs is admirable.  When there are other rapid social and health issues, like water scarcity, sanitation, etc., the creative needs of children could easily be neglected.  However, we encountered a variety of truly passionate individuals who are working hard to empower children, specifically those whom are disadvantaged, but even more globally, to empower a collective group of individuals whose culture is under threat, which is very inspiring. 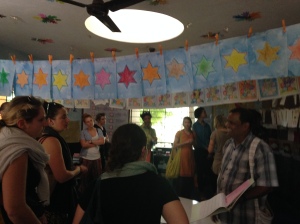