One thing that was pointed out to me before coming to India was the problem with the garbage. It was explained to me that they did not seem to have any particular understanding of how to take care of their garbage other than throwing it out in the street. It was the first smell that hit me, and it has constantly been present ever since I got off the plane.

We have been consistently educated in how diseases are transmitted and how we should use hand sanitizer to keep healthy. Just because we come here for a month, we suddenly need to act as we are in the middle of an epidemic or sanitary crisis. And yes, I understand we are not adapted to the bacteria here and that of course we need to be careful. But what about all the people who live in these conditions? Not, as we do while staying here, in a nice hostel with a regular toilet, a sink, and access to clean filtered drinking water. What about the rural villages? 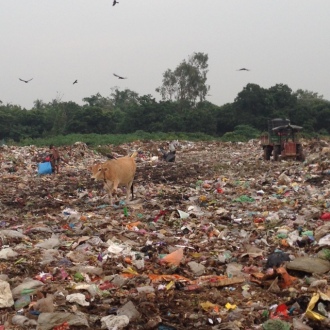 Since this has been in the back of my head ever since we left Sweden, I was really impressed when we visited an NGO called Yatra Arts Foundation. They work with what one would categorize as edutainment, or social marketing. They sing and perform plays with important social messages regarding health education. We got to see a movie about the issues raised dumping garbage, and how it could make you sick if not taking care of it in an appropriate manner. A few of us were even able to attend one of their live street performance later that evening where they sang in Tamil, and performed a play that focused on how dirty water could make you sick. It was truly wonderful to see how the children watching (and they were many, maybe, close to 50!) were laughing and participating in the play and in the vocal performance. They even took part in the dances on the little lit up area the artists were using. 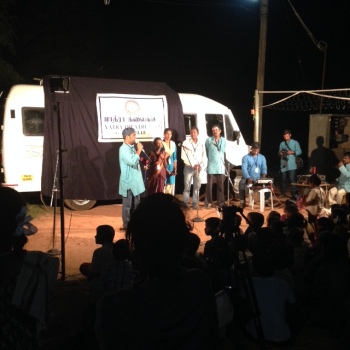 The work being done by Yatra is really important, and I believe it should be spread across India and to other countries that are facing similar problems. Grass root level edutainment comes across as a very effective way of teaching children about these issues, since they may not have access to other sources of information. How could they be exposed to a national television campaign regarding these issues if they don´t even own a TV or if they barley have electricity?