The Tamil Nadu region, and more broadly India as a whole, is riddled with deeply rooted, systemic problems.  These include mass suicide among farmers who have lost hope under crushing debt, a seemingly inescapable caste system designed to keep certain portions of the population segregated and out of sight, and much of the female population subjugated as second class citizens in the workplace and the home.

Most ordinary places in the world would take the burden of these and wear the gloom they cause on their sleeve.  However, India is not a normal place.  Everywhere we’ve been, we’ve heard stories of horribly depressing situations, yet equally consistent has been encountering irrepressible joy and humility. 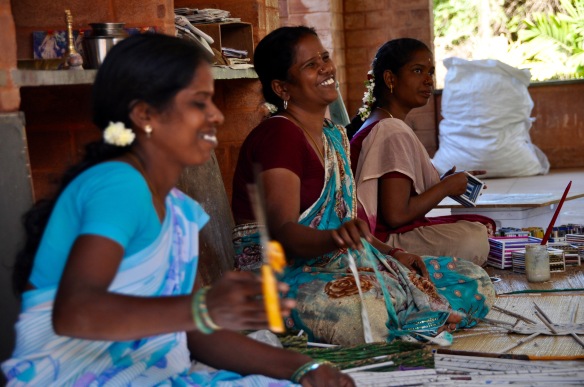 The women of W.E.L.L. Paper (Women’s Empowerment through Local Livelihood) craft beautiful products like baskets and jewelry using upcycled waste materials, including newspapers, magazines, and styrofoam packaging. The women come from the surrounding villages, some from troubled situations.  The result of their work is gorgeous, but their uplifting spirit is the real souvenir one takes away.

The trash problem in Tamil Nadu is all-consuming and ever-growing.  The source of the issue is nuanced and complicated, but the result is very clear.  You can walk with it in the streets and swim with it on the beach.  For some, though this is a financial opportunity.  A number of off-the-books recycling operations have sprung up.  The one we visited was a plastic dealer who buys bottles mostly, sorts them, and cuts them down into smalls chips for resale to plastic factories.  The people that work there are literally dealing with garbage all day, but somehow they were all beaming.  They laughed, joked, and asked for photos with us.

By far the most surprising example of the resilience of this region, though, was when we visited the Samugam Foundation.  The foundation operates as an orphanage and education center.  The children there are gypsies, growing up in the most destitute areas of Pondicherry, mostly amongst the rag-pickers near (and in) the landfill.  However, once the door opened and we stepped inside, you  could never have guessed that any child there had ever had a bad day in their life.  They immediately grabbed us to dance and sing and eat with them, continuously wearing ear-to-ear smiles and bright eyes. 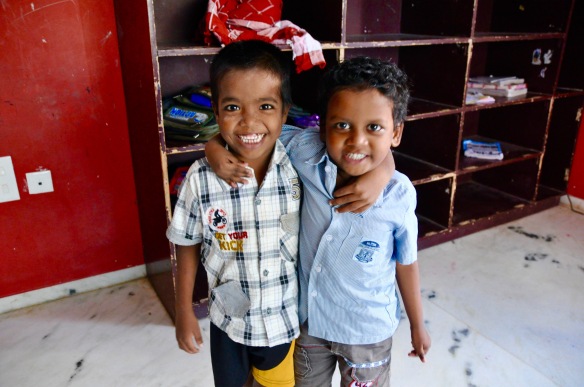 As a group of mostly Western, privileged people, confronting stories like these day after day can cause some serious soul-searching and self-analysis.  Particularly at this time of the year, it has been an important reminder that materiality and happiness are not necessarily components in the same equation.

1 thought on “The Indestructible Beat of Tamil Nadu”