How to combine education with entertainment? Yatra Arts Foundation comes up with the perfect answer: using entertainment and visual arts to make learning for children more effective. The Yatra team, led by Srini Vassan, believes in an alternative way of teaching that gives more weight and importance to practice through visual arts rather than to theory and books. Thus, theatre, painting, traditional dance, and cinema are the activities kids practice at Yatra on a daily basis. The organization also tours the villages around Auroville to perform street theatre plays and organize free workshops. 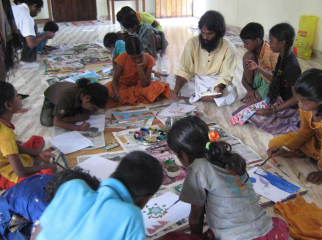 Their ultimate mission is creating awareness among the youngest on the social issues of the country that become obstacles to India’s development. The main topics they want to educate children on are the poor or inexistent waste management and its negative impact on the environment; the high alcoholism rate; the need of women empowerment in a patriarchal society; the discrimination and inequality that go along with the prominent cast system; and the lack of clean water. In order to accomplish this goal, they engage in practical learning through the production of short movies that are entertaining for kids but carry a strong message.

When our group visited Yatra, Srini’s daughters performed some traditional dances as we were served chai and Indian snacks. He also screened two of his short movies (he produced more than twenty-five); one was on alcoholism and the other was a comedy to raise awareness on the poor waste management in India and its fatal consequences. Most of us agreed that both movies were lengthy and that can be problematic since the ultimate audience are children and they get distracted easily. 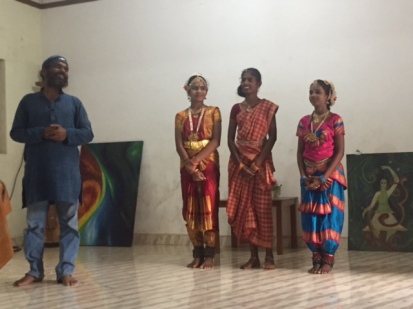 However, the idea of an alternative way of learning that goes away from books and strict theory is becoming a trend in Auroville: the same concept can be found in the work of Auroville Institute of Applied Technology (AIAT), which aims to provide vocational training to young people. The main common point to highlight here is that they believe in creativity as a source of inspiration and motivation, and therefore they stimulate it on their children so that they learn as they enjoy. This perspective on education is a model many institutions in Europe and all over the world could adopt, since assuming everybody is the same and has equal learning capacities does not make any sense. As Srini says, “each kid is a whole unique world” and therefore “it is ridiculous to have only way of educating that tries to position itself as the only valid one”