The Auroville Village Action group was the first stop of the NGO trips here. Their main goal was to help the backwards regions of Tamil Nadu, specifically Vanur. Founded in 1983, the organization is a grassroots organization aiming to to form a connection between Auroville and the surrounding villages. Since the foundation the Auroville Village Action Group has helped 50% of Vanur. The main tenants of the organization are inclusion, sustainability, fairness, and cultural richness and manifesting the full potential of the rural village areas. They connect with both disregarded groups such as women and Dalits, members of the lowest caste system, as well as leaders of both traditional and elected entities to help with their projects. They offer four main sectors of service: community development, economic development, capacity building, and psychosocial services. The most surprising program is the sports program for married women, who are usually not allowed to participate. They play kabaddi, a traditional game that consists of running back and forth without being tagged, all while saying “kabaddi, kabaddi” over and over in one breath. They have taken their league from a casual game to one with uniforms and a tournament of teams formed from each individual village. At the start of the program women were playing in colorful saris, and today they look like a professional team. The organization also offers summer camps for both boys and girls 7-18 for 6 weeks of the summer. They offer training in English, math, drawing, painting, as well as field trips to cities and museums they wouldn’t normally have the chance to visit. Another main project they offer is their self help initiative. There is a large problem of suicide rates in India among adults and children. There is a fear for parents that their children will take their own lives because of the pressure they’re under. Suicide is still not accepted in the Indian culture, and deaths are still reported to police as ‘normal deaths’ without further investigation. Most people suffering from suicidal thoughts are often told to go to temple or to a family member’s home. The Auroville Village Action Group provides a safe space for counseling and for these members to talk and repeat an affirmation that reminds them of their value.

The most surprising aspect of the NGO is how many people they are able to reach. They targeted the looked over people of the greater Auroville community. Similarly their goals are not just the physical well being of the people, they want to help the psycho-social aspect as well. In addition to the affirmation, they council while keeping the cultural richness alive through song, dance, language and sport, all the while helping the individual and connecting traditional cultures with the modernization of today.

The Auroville Village Action Group is looking for students that are self motivated, organized and passionate about their causes. They are looking to expand their fundraising potential by utilizing Crowd Funding and Global Giving. They also want to launch new campaigns and fresh ideas for communicating their purpose. Grant writing, data analytics, and both photo organization and composition skills are needed. They’re looking for a story teller that can express the vision of the Auroville Village Action Group.

After the presentation, we got to meet with their current interns and take a tour of where they make sewn garments and crocheted goods to sell at the Auroville Visitors Center to raise money for the organization. The beautiful fabrics were turned into saris, dresses, shirts, and pants. Yarn was crocheted into cute little animal figurines. The Auroville Village Action Group is an amazing organization that looks to connect Auroville with the outside villages to the aid they need in the four specific areas. It connects to the Sustainability Development Goals set by the United Nations under the gender equality and the quality education indicative. Auroville Village Action group aims to level gender equality  for women through quality education as well as through other social aspects such as sports. 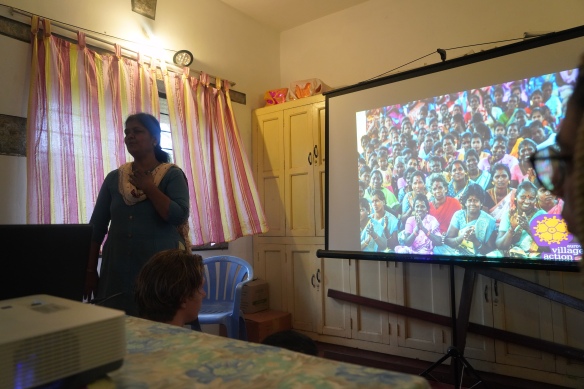 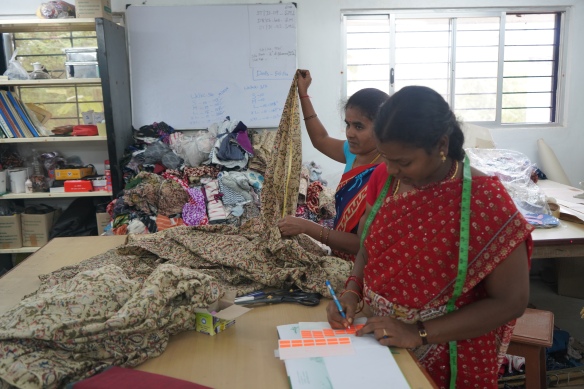