On the last cultural excursion, AUP students awoke before dawn to witness traditional Kolams being drawn in preparation for the biggest festival of the year: Pongal.

There was a haze on the horizon. Waking up before dawn, the sun had not quite touched the corners of Viluppuram, yet there was a distinct dimming of orange and gray.

As we drove through the village on our motorbikes, smoke filled the air. The only source of light came from small fires burning in front of each house and storefront, forcing us to weave in and out to avoid the noxious fumes. Our guide, Balu, later informed us that these fires were intended to cleanse and purify the house, ushering in the new year with new energy. Villagers burned anything and everything from their past: old blankets and sheets, pillows or mats, even literature. Apparently, the local government had made this ritual illegal a few years prior based on its environmental impacts, but locals here held fast to tradition.

It was Monday, January 14th, the first day of Pongal. In the southern state of Tamil Nadu, Pongal is the biggest celebration of the year, marking the journey of the sun northwards, referred to locally as Uttarayan. Dating back to the Sangam Age around 200-300 A.D., this festival pays tribute to nature and gratitude for the recent harvest. Literally, the word Pongal translates to “spilling over,” which is associated with the tradition of cooking rice in a pot until it starts to overflow. We got the chance to taste sweet Pongal while participating in a morning margahzi ceremony. 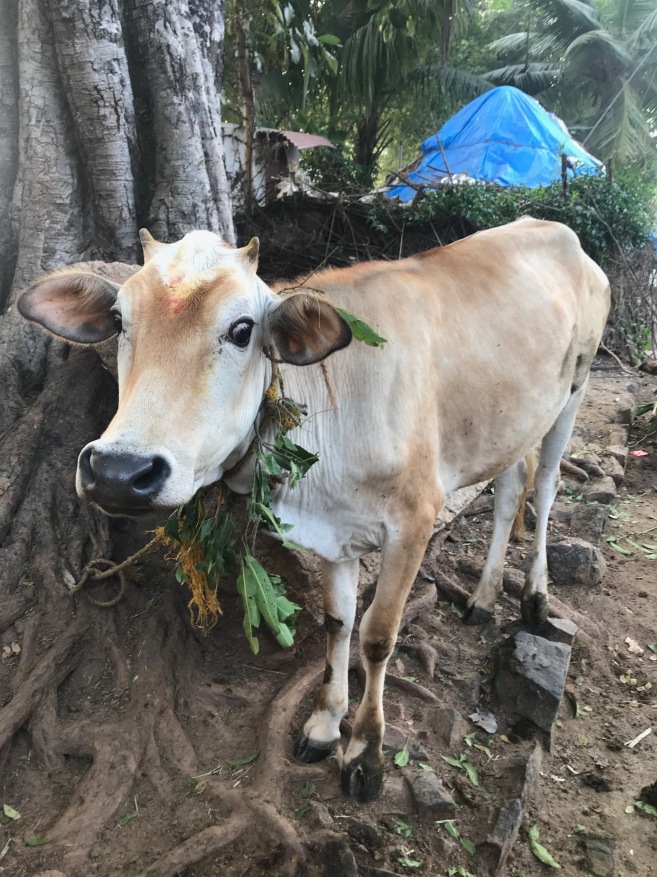 Throughout the course of the morning, Balu took us through two sections of the village and shed light on the beautiful intricacies of the Pongal festival. He identified various plants that protruded from every gate or doorway. The traditional nochi herb wards off darkness and mosquitos. Moringa trees are antioxidant and anti-inflammatory, acting as an antiseptic. We also saw yellow splotches on every house, with red circles in the center. These were painted on with turmeric and various other spices to bring brightness and another form of antiseptic capacity. Perhaps the most popular was the tulsi plant, often referred to as a Krishna tulsi, which cleanses the air.

Walking through the main road of houses we passed beautiful drawings on the ground. Kolams, also known as Rangoli, are intricate drawings made of rice flour and chalk powder. Typically, these geometric shapes are done in white, but during festivals like Pongal a bright array of colors are often used. Our guide, Balu, told us that every doorway in the village would have one, as they welcome good energy and wellbeing.

Before concluding the walk, Balu took us out for one more tea (or coffee for the Parisians). It was here that he outlined the next major event for the Pongal festival: the running with the bulls. This is a tradition for the men, an opportunity for them to showcase their strength. Yet, after the death of a cow a few years ago, the media and animal rights organizations banned the event. This year would be the first renewal of the pandemonium! 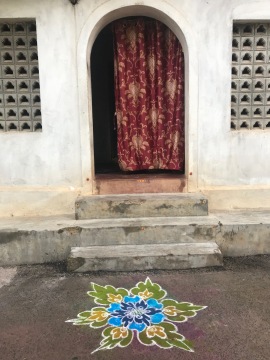