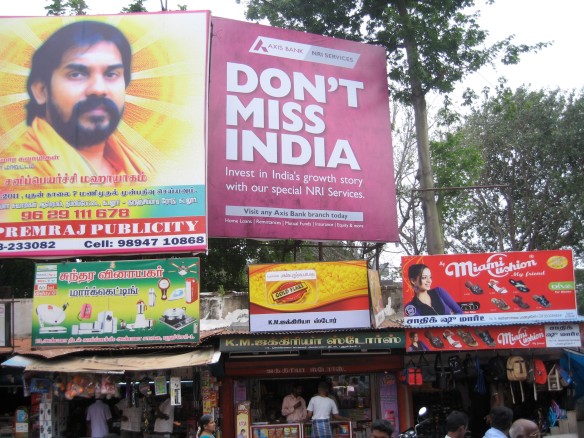 Someone told me there are two grand narratives of happiness in American culture: the One the Road story about the wanderer who seeks self-fulfillment by striking out on his own; and the It’s a Wonderful Life story about the connector who finds contentment by surrounding him (or her) self with loved ones.

In India, I’m feeling pulled between the two.

We’ve only been here four days, but I’ve already been inspired and amazed. On day one, I visited temples over 1,000 years old. On day two, an elephant blessed me, twice. On day three, I learned to ride a motor scooter on bumpy dirt roads. On day four, I met the creative and passionate leaders of six grassroots organizations working to improve the lives and expand the minds of the villagers here. This is my second time in India and I doubt it will be my last. When I’m here, every day is like the past four: I always learn something new.

During the day, surrounded by palm trees, painted elephants and four-armed Hindu gods, I almost trick myself into forgetting that it’s Christmas back home, but at night, I remember everything I’m missing.

Two days ago was the first anniversary of the day my fiancé asked me to marry him. Two days from today will be Christmas. On Christmas morning, my fiancé, parents, brother, sister and dogs will be together opening presents under the tree. On Christmas Eve (Dad’s side) and Christmas day (Mom’s side), my pack of uncles, aunts and cousins will get together, like they do just a few times a year, for dinner and presents. They’ll be there, but I’ll be here, almost halfway around the world.

And even though I’m surrounded by friends, I find it almost overwhelmingly lonely to be away from my family and fiancé at Christmas. I’m stuck between the wanderer and the connector. When I’m here I’m missing home, but if I were at home I’d miss experiencing here.

There’s a Dutch word, gezellige. It’s hard to translate in English, but it means something close to cozy, warm, comfortable, homey, and loving. Right now, all I’m craving is gezellige. I want to curl up on a couch on a cold day, in front of a warm fire, playing board games with my fiancé, with my dog on my lap and a cup of hot cocoa in my hand. And I’d love to be sitting on a floor in front of a Christmas tree opening presents with my family. But at some point, I’d get bored of gezellige and my wanderlust would kick back in.

In India in general, and Auroville in particular, there is a belief in the unity of concepts that appear to be binary opposites. Science and religion, for instance, are just two perspectives on a single truth. I’m on a journey to find the unity between the wanderer and the connector, the point where I can be both without missing either. I’m hoping to find some insight into my own narrative of happiness this Christmas in Auroville, and perhaps find a spot where I’m not so pulled between staying and wandering. 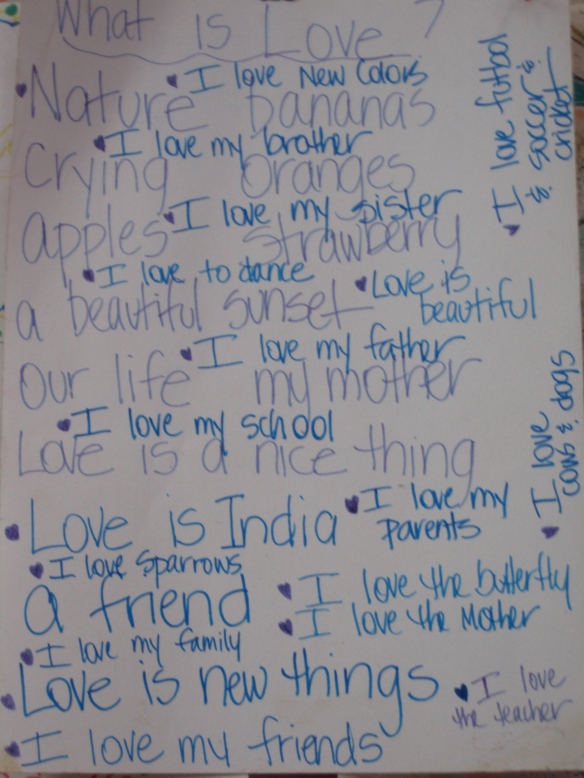 Poster at True Colors, an Auroville NGOs that works with children

3 thoughts on “Happy here and happy there”