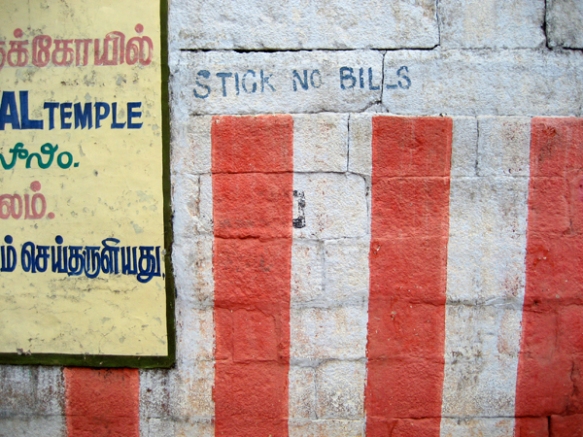 One of the first photos I took upon arriving in India was of a brick wall opposite the thousand year old temples and bas relief of Mamallapuram. I took it because it recalled a topic I’d researched this summer as part of a course called Visual Practices of the Urban: Global Paris, namely the governing of mark-making in public space. (Project notes can be seen here.) Having come to communications by way of art and design, my investigations into things cultural, economic and political are often whetted by encounters with the visual. In Paris, the notice “Défense d’afficher – Loi du 29 juillet 1881” is a familiar sight all over walls, be they private or public, and harkens back to the 3rd Republic, freedom of the press and the Déclaration of human rights after the French Revolution. Upon encountering the words “Stick No Bills” in Mamallapuram, I wondered what they might simultaneously be hiding and revealing of Indian visual culture and history. This curiosity set the course for the next few day’s exploration, as I attempted to gain some understanding of how the residents of Tamil Nadu communicate visually in and around the spaces they inhabit.

Our drive from Chennai to Mamallapuram and then to Auroville led us through rural areas where it was often difficult to determine where one village ended and the next one began. The roads we travelled were flanked by a patchwork of advertising far more dense than one might see on a typical American road trip. Long rows of roadside kiosks were covered in Vodafone red or DoCoMo brown, indifferent to the fact that few if any of these vendors sell any mobile products at all. Every usable surface of every village shop seemed to have been put to work in the service of marketing, obscuring the buildings themselves and leaving little room for the shops’ distinguishing caracteristics, names or signage. It may be said that, in small villages, shops tend to be distinguished by their owners and their placement, rather than signage. Locals perhaps don’t need signage the way someone arriving there for the first time might. Nevertheless, there seemed to me something predatory about the pervasiveness of the ads, as if the shop owners had become dependent on this form of revenue and advertisers were only too happy to seize the opportunity to dominate the landscape and, in some cases, brand entire villages. 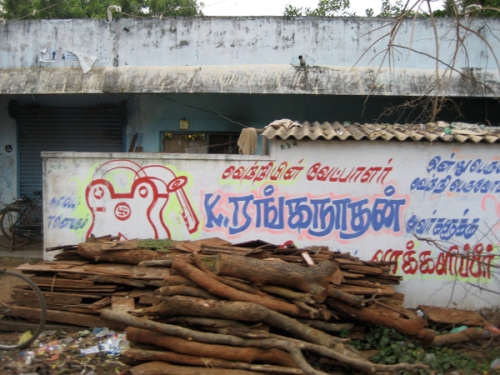 Padlock & Key: symbol of the All India United Democratic Front.

The tension between private space and advertising is playing out in another interesting way in the villages surrounding Auroville. Increasingly, the walls around properties and sometimes those of the houses themselves are painted with text in Tamil and large symbols such as a padlock and key, spectacles, two leaves, a drum, a rising sun or scissors. The sight of the hammer, sickle and star being used in a similar way provided a clue to understanding these messages. The definitive answer came from a large rally held on our fourth night here. Organizers draped a popular intersection in red hammer and sickle flags and filled the air with their amplified voices. These were the signs of electioneering. Indian political parties employ symbols they’ve previously registered with the government, in order to sign their messages and promote themselves. These are different from logos in that their form is not so strictly formalised. They are reproduced by laborers of varying skill levels all over the country, and so the way they are drawn can differ considerably from one application to the next. It is the use of any representation of the object that is protected, and not a specific drawing of it, because what matters is that no other party can use an image of that object once it has been registered, be they scissors, a mango or a bicycle. And once a party gets permission from a property owner to use a wall, the symbol is reproduced as large and as frequently as the surface will allow.

At least one town we visited is uneasy with this visual takeover. Balu, an organizer at the Mohanam Cultural Center located in Sanjeevi Nagar village expressed concerns over the practice of political parties buying their way into the town’s public sphere. He advocates for an alternative that would involve the local crafts people in a project to repaint the entire village in a way that communicates its traditions and creative practices. For his idea to be successful, Balu will have his own form of campaigning to do. He will have to compete directly with the financial incentives offered by the political parties, and convince his community that their walls have another kind of value altogether. 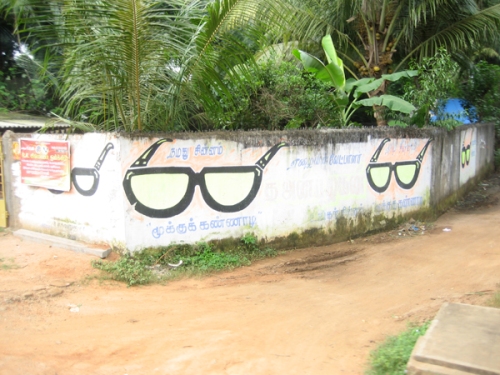 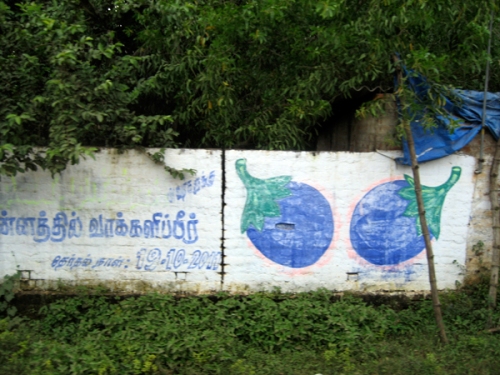 Eggplant: symbol of an unregistered local party, according to Lakshmi, a villager. 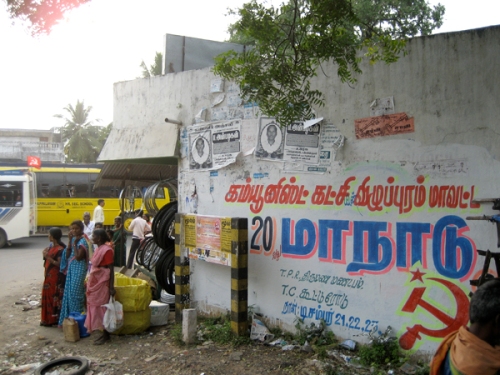