I have chosen to volunteer at LEC (Life Education Centre) for my communication project during this practicum. The center provides educational programs for young women, allowing them to develop skills and self-confidence. My project is twofold: I will be reconstructing the organization’s website and also crafting a proposal for a UN grant to end violence against women. I had briefly met Harini, the head of LEC, and Oga, a volunteer who often comes to Auroville, during our visit 10 days ago. Today was the first time that we actually sat down and discussed the project in details.

I met Sofie, a Linneas University student who is also working on the project, and we jumped on her scooter, riding through the thick forest on bumpy dirt paths and finally arriving at LEC. We arrived a bit early, and slowly walked through the gates, trying to find a familiar face. It was 9:15am, and the girls were chanting their morning prayer in a small, screened in rotunda. A woman leading the prayer saw us and motioned us inside. We took off our shoes and timidly sat down on the yoga mats arranged in a circle around incense, flowers, and two portraits: one of Sri Aurobindo and the other of the Mother. The girls were probably not sure what to make of us, as they giggled and whispered behind their raised, colorful scarves. 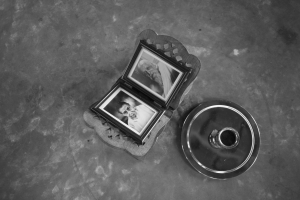 The coordinator passed out music sheets, leaving Sofie and I out, as we do not speak any Tamil. Despite the total language barrier, I was amazed at how it was still possible to decipher the girls’ social roles within the group by observing the tone of their voices and gestures used in their exchanges. I noted the roles of the comedian, the leader, the shy girl, and the bully. The leader scolded the shy girl for being off pace in the chanting, and the bully rebuked in her defense. The coordinator quickly brought everyone back to focus and they continued with their chanting. It was amazing to see how concentrated the girls were during the songs. We sat there listening to them practice, unsure of our position in this situation, until Harini arrived and called us to the meeting.

She explained one part of the song to us. There were two girls bantering back and forth, one girl was telling the other to get out of bed and stop being lazy, and the other was proclaiming her love for her bed and that it was too cold to get up. These prayers are sung from December 15th to January 15th – during the period of what Christians would equate to as “penitence”. This tradition is of Dravidian origin, which shares many beliefs with Hinduism.

It was overall an interesting way to start the morning, feeling like an outsider in one sense yet privileged to have been invited into their tradition in another.