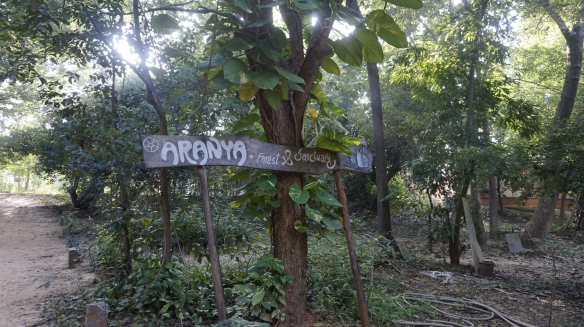 The entrance of Aranya Forest and Sanctuary

The Aranya Forest and Sanctuary is a sprawling and lush forest that sits just west of the border of Tamil Nadu and Pondicherry. The proprietor, D. Saravanan, walks the slight paths cutting through the forest easily, over the brush and under the branches of trees. “Look around you, how do you feel?” he asks openly but not rhetorically, stopping in a modest clearing. Answers to his question range from cool to peaceful. Though the forest is lush, full of various trees, plants, and wildlife, it is only 25 years old. Saravanan built it himself, from soil that was mostly sand and rocks, with topsoil that had been completely depleted and eroded from farming.

D. Saravanan walking through the forest that he built.

Though it has been over 20 years, Saravanan says that he still does not have topsoil in some places. The difficulty lies in the fact that in Tamil Nadu, as well as India as a whole, water and rain levels have been progressively depleting. Saravanan blames this on the lack of forest as well as the continual destruction of existing forests, as this is what keeps the topsoil and holds water. “This is life for us,” he says emphatically, “This is the main source.” By his estimates, the world needs to keep about 30% forest to survive, at least 11% in India.

D. Saravanan talking with our group.

Saravanan is not a botanist, something he makes clear early on in our tour but, he says, “I am learning.” While he started planting hearty trees that could survive the weather and lack of nutrients in the soil, he is now focused on planting what is indigenous to the tropical environment. Some of the 250 plant varieties that Saravanan started planting with include ebony, yellow satin wood, santolina, and sandalwood. He says that after a recent study, he found that there were now a variety of over 700-800 plants because of plants and animals. While his ambitions and forest fall under the United Nation’s goals for Sustainable Development #13, Climate Action, as well as #15 Life on Land, perhaps it is his wise words that really send the message home. “This land belongs to whom?” He asks rhetorically, “The future.”

Plants donated and planted by our AUP group.