The Jaly House, which has locations at 1st and 11th Cross in Pondicherry, houses over 100 children between its two buildings. The name ‘Jaly,’ pronounced like ‘jolly,’ stands for ‘Justice, Awareness, and Loyalty for Youth,’ the energetic owner Bruno Savio divulges to us on our visit on the 18th of December, 2019. The center, which houses children, ages five to 18-years-old of the local gypsy (or ‘Dalit’) population.

The Jaly House is part of the Samugam Foundation, which was started by Savio’s late father as a home to help those suffering from leprosy. The foundation takes its name from a word that means ‘society helping other society,’ as well as Savio’s personal acronym of ‘Social Awareness, Mutual Upliftment, Guidance and Motivation.” When Savio’s father had a stroke in 2006, he decided to take on the responsibilities of the foundation alongside his media and advertising career. In 2008, he opened up the foundation to include the housing and schooling of local gypsy children. Currently, they work with over 300 children and house 240. 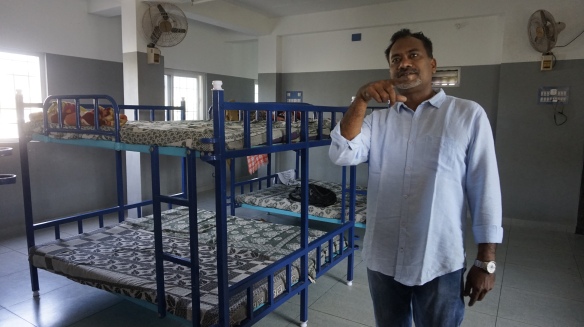 Savio standing in one of the boys dormitories.

While Savio’s goals fall under the UN’s Sustainable Development goals for good health and well being as well as quality education, he still has trouble regularly finding funding. The foundation was voted ‘the best child welfare center’ this year, however, the foundation is still waiting for a grant from the government. To combat this, Savio opened up his program ‘Sewing the Seeds’ which teaches skills like sewing to local gypsy women to give them a source of income. Right now, they crafts they make such as tote bags are being sold to countries like Belgium and France through their web shop.

Examples of work made by members of Sewing the Seeds.

Savio has many success stories that have come out of the foundation. He speaks proudly of the four women who have gone on to become nurses, two of which are working in Chennai. Another one of Savio’s students is to be featured on BBC Tamil for doing well in school and winning awards. Though the foundation has yet to hear back from the government for financial support, Savio is still hopeful, saying “when there are children, the community comes to help.” While volunteer donations help the foundation significantly, he says it costs over 450,000 rupees in expenditures to feed, clothe and house over 100 children per day. In his words, “I’m getting an elephant, but I’m not getting food for it.”