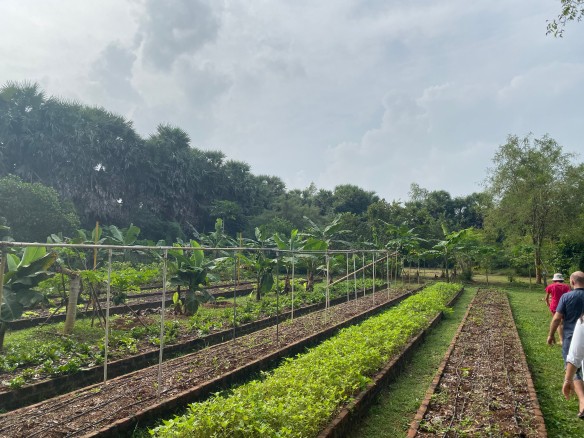 Situated throughout Auroville are gardens and farms created and curated by and for members of the community. One of these around 20 farms is The Buddha Garden operated by Priya Vincent.

Over the span of 20 years, she has manufactured a sustainable and dependable system of farming that provides locals with fresh products year-round. Her agriculture revolves around respect for nature present in every step of the farming process from cultivating microbes in the soil to welcoming a diverse range of insects to operate as a natural pesticide, she aims to support natural methods to grow food organically. The garden is segregated into four different subsections with four different names for the four languages of Auroville (Tamil, Sanskrit, English, and French), each utilized in a cyclical growing pattern that preserves the soil in each garden. Depending on the season, only certain gardens are used to their full capacity allowing unused parcels of land time to recover lost nutrients from the previous season’s harvest. This farm has managed to remain completely solar-powered despite the general tendency towards dependence on energy produced by wind turbines throughout Auroville. However, one problem Vincent has been unable to solve is that of water scarcity. Throughout Auroville, the community relies on water tanks created 1500 years ago to sustain the region during the dry season only to be replenished during the monsoon season. Though with such a substantial population boom, the tanks have been unable to keep up with increasing demand, additionally lakes and water beds, which allow for an alternative water source, are quickly being depleted via evaporation due to ever-increasing temperatures in the region. One lake on the property was only able to replenish to half of its original size during the most recent monsoon season, and Priya predicts it will be completely dry going into the next one.

Obviously, agriculture is dependent on these water sources, and thus, so too is the community, but as water becomes increasingly more scarce, how can this community remain at all self-sustaining? Priya is desperate for this answer, her commitment is to Auroville first, and she has made every effort to keep the population fed even switching to crops that require less water and digging more wells throughout her property. She is realistic in her position; however, claiming outright, she does not think they will solve the issue of water. One option, however, is hydroponics, an agricultural system that can produce just as many crops as traditional farming techniques with one third the water, but implementation of such a system is expensive and time-consuming. To convert each of the 20 odd farms across Auroville to hydroponic farms would cost half a million dollars and take at least 5 years, time, and money that unfortunately these individuals do not currently have. For now, Priya continues to get up early, put on her work boots and feed the community the only way she knows how, but for how much longer? Only time will tell.