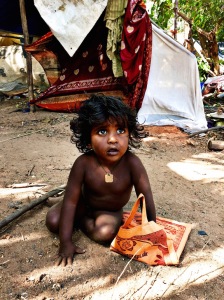 There are some things in life that no matter how ready you think you are for them, they still manage to instantaneously knock you off centered. A trip to the gypsy village, smack between the Puducherry airport and the Puducherry dump, became an experience that did just that for me. I am warned by the organization I am working with, Samugam, that it is going to be quite an emotionally draining day, but I naively believe that I have become somewhat numbed to the poverty I have been witnessing every day.

After an approximately 30 minute rickshaw ride weaving our way out of Puducherry, we trace the outskirts of the airport to arrive at the gypsy village. A thin paved road separates the gypsy village from a tribal village to its left. As we hop out the rickshaw and make our way into the village, I immediately come to the realization that I am not “numbed” to the poverty I had been seeing in Chennai and Puducherry, but I had simply not yet been immersed in poverty so unimaginable. 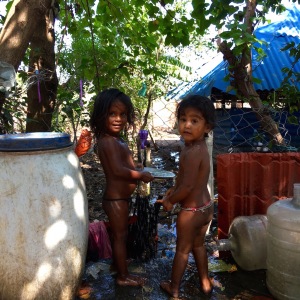 I witness things here that you wouldn’t believe were true unless you saw them with your own eyes. An aging man sits upon a mat, plucking out his hairs, weaving them into what appears to be a bowl. Another, stricken with fever, sleeps apart from the village, covered in blankets; he is kept company only by a bird whom cries out in its cage. Elderly women plead for us to purchase their handmade crafts. A grandmother begs for acknowledgement of her grandson’s poor skin condition; his flesh is cracked, dry, and filled with dirt. Young children run around us naked, covered only by a string of beads around their waist. Pigs rummage for food amongst trash deemed inedible by the gypsies. A man and two boys rejoice over their catch of the day – a large bat, which they proceed to skin and cut into for that night’s meal. A woman sits along the path, amongst a horde of stray dogs, eating from a plastic bag containing turtle soup. She is unfazed by the 3 mange-stricken chickens that occasionally manage to grab bites of meat from her spoon before it reaches her mouth. A foul smelling bucket sits atop a cart surrounded by rotting onions. Through questioning its discovered to be the results of the day’s pickings from the trash; already spoiled and covered with flies – waiting to become a few of the families’ supper that evening. Multiple litters of newborn puppies are scattered about the village; we are told they will not last through the week. A dead puppy, covered in flies is sprawled out, unnoticed within a dark, dust covered, and uninhabited home the gypsies refer to as the “devil’s home”. At the end of the village sits a home where we learn of a mother’s fear for her one-month-old daughter who is being threatened by a snake that makes its way into their home at night. As we walk back through the village on our way out, we pass a bird in a cage, surrounded by dead rats. Recognizing our glances, a man nonchalantly goes over and picks them up to be put on display for us. We inquire if the villagers are warned of the diseases these rats carry and if they are cautioned to not eat them? The response comes that these rats are a source of protein and a means to the gypsies’ livelihood. 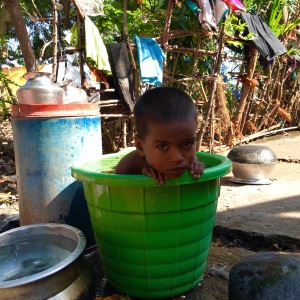 It pains me as I jump into the back of the rickshaw and pull away from the village back to the comforts of my hostel. How is it still possible that people can be living like this in this day and age? The work that Samugam is doing there is impressive and meaningful, yet the poverty in the village has not been eradicated; it doubtfully ever will be. To think this was only one village… 54 families. What about the thousands of others all across India? Families and communities without a helping hand like Samugam, working to pull them from the darkness.

Is there a way to help bring these people out of poverty? A solution that can be recreated across thousands of villages just like the one I had visited? What can we do? How can we make an impact on this generation that will fuel a change in future ones? The questions still linger with me – answers still to be found.